The Invest in Youth Coalition is proud to announce that on Thursday, April 1, Los Angeles City Councilwoman Monica Rodriguez secured $1.1 million for the city’s first-ever Department of Youth Development. Councilman Rodriguez celebrated the win with dozens of youth activists who have lobbied over the past 7 years for the City to fund a department focused solely on providing services and resources for youth. These young people from the Invest in Youth Coalition represented more than fifty (50) youth groups and community organizations from all over Los Angeles.

Councilman Rodriguez is extremely grateful to Mayor Garcetti for his promise to set aside $1.1 million for the department in the City of Los Angeles budget. This department will enable the City of Los Angeles to provide youth ages 10-25 with services focused on violence prevention, youth counseling, financial literacy, job readiness skills, technology assistance and other services that will better prepare them for the future.

“There’s always been ‘Oh, we can’t do it.’ We shouldn’t apologize for being forced to follow the rules of a system that weren’t developed by the people who now live here,” Rodriguez said, acknowledging that the city has been slow to act.” This is an opportunity for us to lead systemic change in this city.” 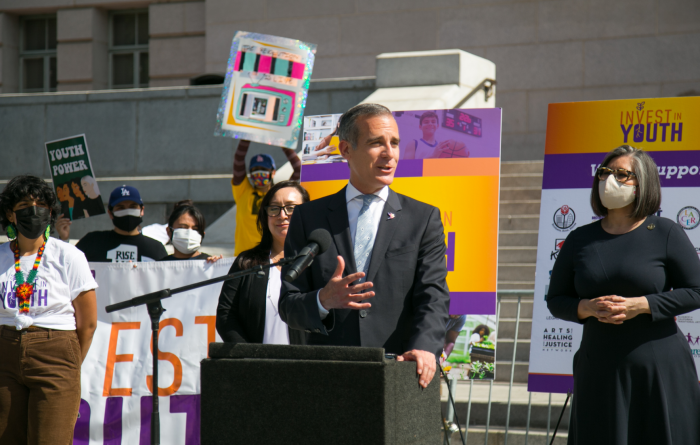 The Invest in Youth Coalition, led by Lou Calanche, is made up of nonprofit educational groups, community leaders, community organizations, parents, neighborhood groups and youth from the San Fernando Valley in East LA, from Koreatown to South LA. Calanche thanked Council Member Rodriguez for her focus on the youth of Los Angeles and her dedication to establishing the Department of Youth Development. Calanche also thanked Mayor Garcetti for his enthusiastic support of the service and his commitment of $1.1 million to the City budget.

“I hope this is just the beginning,” Calanche told officials and young activists gathered at City Hall Park. “We want to fill this park with thousands and thousands of young people who are empowered, who are employed, who have access to all the resources they need to be successful.”

Jackie Vargas, one of the young speakers at the press conference, has been a member of Legacy LA since college. “I can honestly cry right now because it’s been years,” Vargas, now 21, said. “It’s been years and years of struggle.” 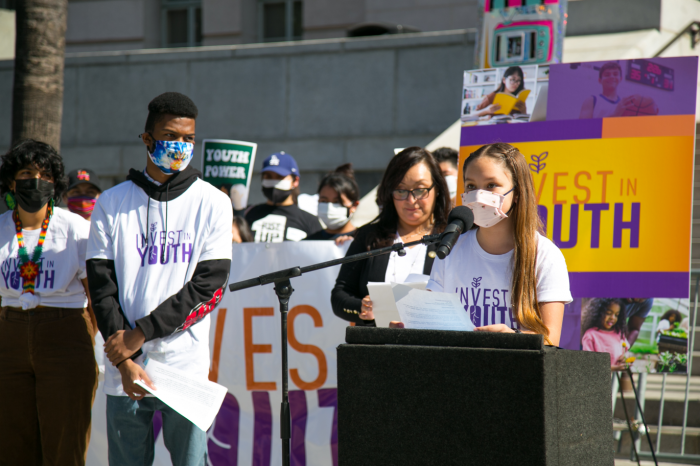 Starlyne Vargas, a 10-year-old Invest in Youth Coalition member and younger sister of Jackie Vargas, said, “I want to grow up in a city that cares about me and my future.

Christian Wimberly, another young member, said: “Young people in this town have worked so hard to finally see the creation of a youth department. We are extremely grateful for the support of Council Member Rodriguez and with this new funding from the Mayor, we look forward to hearing that the City Council has voted to approve the department. »

The Invest in Youth Coalition looks forward to maintaining momentum and working with the Los Angeles City Council to formally establish the Youth Development Department. Councilman Rodriguez proposed the creation of the department in February and it is still pending approval at City Hall.